Victor Navarro is a Tucson-based contemporary Latin American artist with prominent ties to the international art community. At a young age, Victor earned numerous art awards including a Silver medal from the Paris International Academy of Lutece and recognitions from the Société Nationale des Beaux Arts and the European Center for the Promotion of Arts and Literature. At age nineteen, Navarro was one of the youngest artists in the world to be invited to exhibit his artwork at the famed Louvre in Paris, under the salon “Carrousel du Louvre”.

Born in Guadalajara, Mexico, a Tucsonan since he was 10 years old, Navarro’s first experience with painting occurred at Carson Middle School. “I was in an art class. The teacher, Beverly Henderson, had her easel set up in the classroom and painted with oil while we made art using simpler materials,” says Navarro. “I purchased my own oils and we painted side by side. Over the next two years, I learned oils from her.”

Navarro launched his artist career at the tender age of 13. “I sold paintings to two teachers. While at Santa Rita High School, I made art for myself.” The muse moves through him at a trajectory that is carrying him to astronomical heights and incomprehensible depths for an artist who has yet to reach 30.

Still in high school, he traveled to France, where he met Madame Denise Woirin, a highly recognized European art critic. Her affiliation with the Drouot Cotation Dictionnaire, a European art directory similar though more prestigious than Christie’s, offered exposure for the young artist where many of the most famous artists in the world are referenced.

Navarro passed through rigorous interviews and juried auditions to be accepted into the elite group of international artists. Inclusion is considered a lifetime achievement. Navarro is the youngest artist ever to be honored with permanent placement in Europe’s most coveted and revered art authority—so unprecedented that an editorial change, removing artists’ birth dates, occurred to hide his youth.

While an art student at the University of Arizona in 2009, Navarro put his minor in marketing to use to promote culture and art. He established the International Art Exchange based on the premise of an artists’ dialogue between France (the old world) and the American Southwest (the new world). The annual event includes art exhibits, cultural interchanges and new opportunities for creative partnerships. The Exchange is now in its seventh year.

Under Navarro’s direction, the Art Exchange has alternated between French locales and the Southwest (Arizona, Sonora and Baja, Mexico). In November of this year, it will be based in Clifton, Arizona; coinciding with the annual Colors of Copper art competition and wine festival. This year, the town of Clifton has renamed the event Colors of Copper Internationale. The art event will feature artists who successfully placed in a juried competition, depicting visions of the colors of copper.

Navarro lives for making art and promoting the appreciation of its magical qualities. His canvases and objects trace an eclectic trajectory, soaking up inspiration wherever he lands. “My creations are born of the feeling. Today, after several events and without a required explanation, a work came out of the paintbrush,” he enthuses. His “Tonantzin, Guadalupe”, a respectful variation on the Mexican classic, “Virgin of Guadalupe” is an example. The recently sold painting has a spiritual tone not found in the more solemn traditional renderings.

Time in Cuba led to the Orisha Art Collection, inspired by the magic and spirit reflecting the natural manifestations of Olodumare in Ifa and Yoruba religion. He rendered impressions of the naturalistic manifestations of the deity’s powers and influences in an abstract expressionism style. These paintings are currently on exhibit at the Tucson Hispanic Chamber of Commerce.

Painters of renown are commissioned to do portraiture and Navarro includes image painting in his portfolio. Sprinkled among a collection titled Figurative Mix are portrait commissions from Angelina Jolie and Oscar D’León. His studies of faces, torsos, landscapes, mothers and children and Madonnas each intensely gaze at the viewer. Even the back view of a flowered skirt seems to have an attention outward.

Navarro chooses to sell through his network of connections instead of through galleries. “I’m selling me as art,” he says simply. The pragmatist and marketing savvy in Navarro channeled his position and influence creating the annual International Art Exchange. His La Boutique line of jewelry, bedclothes, cosmetic bags, masks and more are other ways he shares his verve of artistic color in form and function utility. Each piece is imbued with Navarro’s magical expression.

The established artist is generous in nurturing talent in others, providing opportunity for discovering creative inspiration. He is currently guiding students in using acrylic and oil in a self-paced art class at Pima Community College. “As the instructor, it is my goal to help students develop ideas, techniques and a critical eye to improve their art regardless of where they are on their artistic journey,” explains Navarro. In this risk-taking environment, he warns the students: “This course may change the way you perceive the world around you. The relationships of colors, lines and shapes cannot be unseen once you have learned to accurately observe them.”

Navarro knew he was an artist at four, was mentored at the cusp of his teen years, feted by world class art authorities in his mid-teens and anointed to sit on the mountain top in his late teens. His legacy already established, he humbly notes that there is more work in maturing his artistic gift. “When I love the art I have doors open.”

Victor Navarro’s art and boutique can be accessed at VictorNavarroArt.weebly.com. 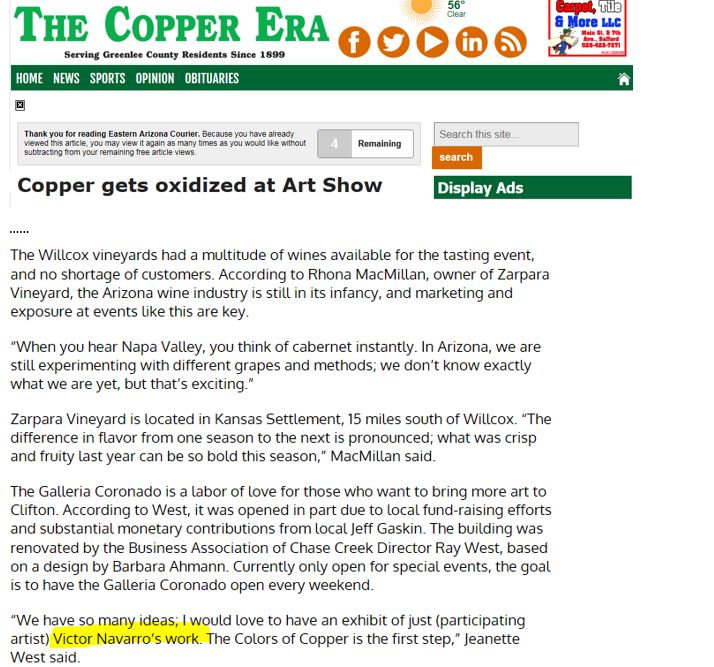